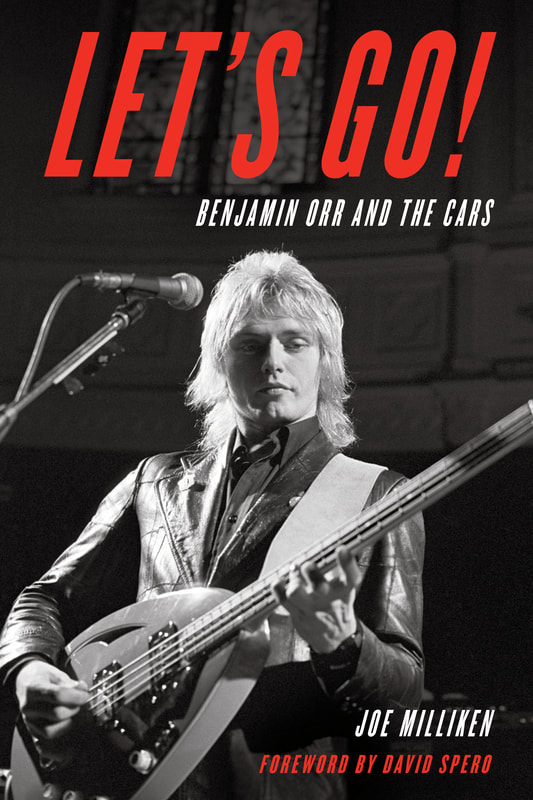 Benjamin Orr was the co-founder, co-lead singer, and bassist for the platinum-selling rock band The Cars. Often considered the band’s heartthrob, Orr possessed an incredible voice, diverse musical talent, and rare stage presence, all balanced by an enigmatic personality and a relentless determination to reach rock stardom.

Sweet Sweet Music spoke to Joe about the book.

What was the moment when you were sure that you had a special topic with Benjamin Orr?

A Ben/Cars’ fan had approached me, out of the blue, suggesting that I write a book specifically about Ben. I was hesitant at first, wondering why I wouldn’t choose to write a book about the band as a whole, or perhaps the front-man and songwriter, Ric Ocasek.

But when I started investigating Ben, I started discovering all these cool things about his early life growing up in Cleveland – home of the Rock & Roll Hall of Fame. I learned that he was a musician from an early age, quit school as a high school sophomore to pursue his music career and was a “teen star” in Cleveland, with his early band the Grasshoppers appearing on a syndicated TV music show called “Upbeat.” All of this happening over a decade before he would become famous in The Cars! It was then, that I knew I had to tell his life story to the world.

Can you tell us something about how the book came about? What was your approach?

I started by researching and learning as much as I could about Ben through the internet and music magazines and created a draft, or long essay if you will. From there, I just started adding to the essay by searching out and interviewing as many people as I could who knew Ben, so they could tell his story. I ended up interviewing over 120 people who knew Ben, throughout his entire life.

You have interviewed many people. Why do you think people like to talk about Benjamin?

Ben was a special and unique guy. He was not only an incredibly talented, all-around musician and amazing vocalist, but he was a very kind, loyal and generous man who had an aura about him. If you were Ben’s friend, you were his friend for life and he would do anything for you!

Did you have a preconceived plan about how the structure of the book should be?

Because Ben had passed away (October 2000) several years before I started the book project, obviously I could not interview him myself. That’s when I decided to find as many people who knew him as possible, so they could help tell his story. I’ve been told that the book almost reads like a documentary. I sort of narrate, while all these people who knew Ben offer their insights and experiences with him.

When I think of Benjamin Orr and The Cars, there are two moments that I always remember: the first time I heard the song Heartbeat City on the radio and the time, during Live Aid, that Drive was used as a soundtrack under the heart-rending images from Africa. Both times I have been crying loudly, moved to tears by the music. What is your special connection with the music of The Cars / Benjamin Orr?

That’s a tough one. But I can tell you that The Cars were one of the first bands I ever loved when I first started getting into rock music in 7th grade. Therefore, it is amazing to me that all these years later, I have written a book about the co-founder of the band. Sometimes I still have to pinch myself!

Even though I never got to meet Ben, I somehow still feel like I knew him, because of all these interviews I’ve done with people who were close to him. As for the music, The Cars are one of those unique-sounding bands that you just can’t pigeon-hole. They’ve been called classic rock, new wave, pop… but I think they combine all these elements to create a sound and vibe that is all their own. When you hear The Cars on the radio, you know it’s them!

One of my fondest memories is going to Cleveland in 2018 to see The Cars get inducted into the Rock & Roll Hall of Fame… in Ben’s hometown! My book Public Relations Coordinator, Donna, surprised me with the tickets and it was something I will never forget.

For more information or to purchase the book, please visit www.benorrbook.com.

​Joe Milliken has been a music journalist, editor and
​website publisher for 20 years. In 2014, he launched Standing Room Only  (http://www.standing-room-only.info/), a website dedicated to promoting music, the arts and specialty food on both a local (Boston, New England) and national level. Originally from Boston, he now resides in southern Vermont with his wife, Kelly, and his children, Nate and Erin.