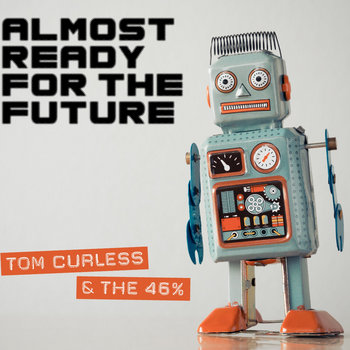 SweetSweetMusic spoke to Tom Curless about his new record ‘Almost Ready for the Future’.

When (and why) did you decide to release a record under the (fantastic) name Tom Curless & The 46%?

The name is sort of an in-joke. I formed a band to play shows to support my last record Songs of Movement, and it really felt good, it felt like after a long time of searching I finally found some kindred personal as well as musical spirits. When we were rehearsing some of the new material before heading into the studio, Ron Vensko the drummer said well, I think we have about 46% of the material down…we all laughed and it became the catch phrase, “well I think we have about 46% of that song” I wanted to represent the band on this release so I christened them the 46%!

I think I can hear that recording some songs was a blast. It is so powerful, so straight from the heart. Or have you been looking for the right sound for a long time?

Yes, there is a lot of “live in the studio” band tracks on this one that I have wanted to do for a while.I did the vocals later and I did a few overdubs later but the majority of the basic tracks are a band playing live together which gives some of the songs a different feel and urgency. This is what I was going for and it was FUN!

Once you have written songs like Always in Between and Just Wanna Talk, it seems increasingly difficult to keep that quality. How did you manage to keep the level of quality so high?

I appreciate that. I write a LOT and I usually go through a lot of songs/demos/ideas to get to the 11 you hear on the record. What is funny is that Just Wanna Talk came out of nowhere. I was strumming my acoustic one afternoon and those chords felt great. I quickly came up with a second section and the vocal melody came really fast. The song just came out of nowhere and when it was done I really liked it. I felt like I just got lucky with that one. Sometimes that happens but not as often as I would like! Ha

And then you release the record while the world is turned upside down. How does that work?

The record had been done for awhile, and I was thinking about waiting to release it later, but I spoke to Keith Klingensmith at Futureman Records and he just said, well, why wait? Wait for what? People probably need music now more than ever with all of this weirdness going on and maybe it could cheer someone up who is feeling down during this crisis we are living in. It has been a really weird year, I am just sad I can’t play shows to support the release, hopefully we can later this year if things change, but who knows?

Some of the songs have a beautiful outro. That doesn’t seem like a coincidence?

I am VERY fond of outros, if you listen to my music you will hear a lot of outros. I tend to get bored quickly and I always want the song to take a left turn if I think things are getting too predictable. I am glad you appreciate them.

Burn & Shine must be about someone special?

Burn & Shine is about a few different people but it started as a song about my older sister who had a lot of major life changes happen in a very short time. We were talking and she said “What happened?” and it struck me that this happens a lot to many people where things may seem to be going along fine and then WHAM life throws you a curveball. You have to try to roll with the punches but sometimes that can take a long time and sometimes we don’t feel like changing. Sometimes you feel like what you are doing makes no difference anyway. That is the general idea behind the lyric but it started from that phone conversation with my sister.