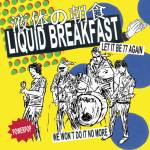 Look out for the single which will be released early 2016.
Check the Still Unbeatable Records website for updates.

If you would like to find out how they sound, please check

What was the biggest fun during the making of the new single?

The recording sessions for the Liquid Breakfast single were special because it’s no ordinary band, so it was no ordinary recording process. Usually you rehearse the songs and then go into the studio and record them. But we come from different countries and most of us never met each other in real life before. Malte Buhr, who wrote the songs, and I have had online contact for some years, we met through MySpace and made contact again through Facebook and started making music online. He is a fan of my band Rotjoch  and at a certain moment he asked me if I would make a Rotjoch style version of one of his songs and later on I did that with some more of his songs. At a certain moment he suggested to record some of these songs and release them. So we planned a recording date and got together. He asked  bassplayer Luc Bulles from London to join and I asked Rotjoch’s drummer William van Veenendaal. The special recording circumstances in which we had to meet for the first time, do  a short rehearsal and then start recording was great fun. But for me the biggest fun was finally meeting Malte in real life after knowing each other for many years through online contact only.

I think that must be “Bad Boy” because it’s a kind of statement what Rotjoch stands for. Being honest, tell the people what you think even though some may not like that.

Of course it means opportunities as well as problems. For instance the promotion, in the old days you could go to the radio stations at certain hours and talk directly to the dj’s and ask them to play your records. Not only the big companies but also the small independent labels and bands who released their own records could do that. And the dj’s could  decide themselves if they would play your songs  or not. Nowadays it’s not that easy to meet them and besides  most dj’s don’t decide themselves what they play anymore. But on the other hand you can promote your music by the internet all over the world, you have all kind of websites to support DIY artists.

Who is the best musician in the world nobody has heard of yet? And why will this change very soon?

I really couldn’t say. I see a lot of good musicians but you need a good team of musicians to make a band. But they don’t necessarily need to be the best musicians.

She tells you she will decide on a 5-song-mixtape if there is going to be a second date. Which 5 would you put on?

That’s very difficult, you could say that there should only be romantic songs on it but I think it would be better to put some songs on it that say something about me. But if you ask me tomorrow I might put some other songs on the tape..

Apart from doing a lot of gigs I’m waiting for the release of the Liquid Breakfast single and try to make some promotion for it in The Netherlands. Then there’s going to be the release of the Rotjoch EP Nobody Knows, so I’ll be quite busy doing the promotion for that one. I will be doing some recording sessions with Rotjoch for a CD we want to release. And if there’s some time left I’ll be playing at  jam sessions.